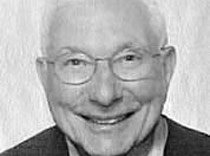 The MLA mourns the passing of Malcolm Smith, MLA trustee from 1988 to 2018 and an indispensable adviser to the organization’s staff for decades. Smith advised on the endowment and general financial matters and was praised for being a steady presence in hard times and an ambassador for the MLA at the many New York City institutions he helped to govern. Malcolm Smith attended Boston Latin School, graduated Dartmouth College summa cum laude and Phi Beta Kappa, and received an MA in economics from Harvard in 1948. He chose to forego an academic career in favor of joining the staff of General American Investors Company in 1948, and he spent his entire business career there, becoming president in 1959. In addition to serving as a trustee of the MLA, he was a trustee for The New School, Human Rights Watch, the John Guggenheim Memorial Foundation, and many others. Smith and his wife, Betty, enjoyed international travel with an art history focus. They travelled the United States, Europe, Asia, Africa, and South America, often with their family. Smith died on 16 August 2022 at age 99 and is survived by his wife of 74 years, his children, and his grandchildren.