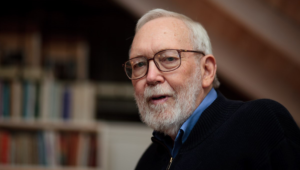 The MLA is deeply saddened by the passing of J. Hillis Miller, Distinguished Research Professor Emeritus in the Departments of Comparative Literature and English at the University of California, Irvine. Born in 1928 in Newport News, Virginia, Miller received his BA from Oberlin College in 1948 and his PhD from Harvard University in 1952. His dissertation, The Symbolic Imagery of Charles Dickens, was the basis of his first book, Charles Dickens: The World of His Novels (1958). Miller taught at Johns Hopkins University from 1952 to 1972 before taking a position at Yale University, where, along with colleagues Paul De Man and Geoffrey Hartman, he was a foremost proponent of the Yale school of deconstruction. After fourteen years at Yale, Miller headed west to the University of California, Irvine, where he spent the remainder of his career. A consummate scholar with a remarkable range of interests, Miller published on Victorian literature and poetry, twentieth-century literature, deconstruction, phenomenology, and psychoanalysis, among other topics. His notable 1986 presidential address to the MLA defended literary theory and deconstruction against criticisms from the right and the left. Miller was a fellow of the American Academy of Arts and Sciences and a member of the American Philosophical Society. In 2005 the MLA recognized his considerable accomplishments with its Award for Lifetime Scholarly Achievement.