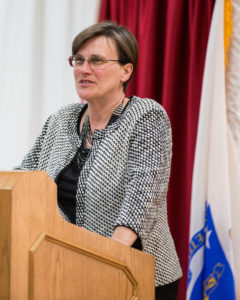 In a statement released today, the MLA announced that Paula M. Krebs will become the fourteenth executive director of the association on 1 August. Krebs, who is stepping down as dean of the College of Humanities and Social Sciences at Bridgewater State University, will succeed Rosemary G. Feal, the MLA’s executive director since 2002. Krebs served on the MLA Executive Council from January 2013 to January 2017 and was a member of the Nominating Committee from 2009 to 2010. She also served on the executive committee of the Association of Departments of English from 2003 to 2005. Before arriving at Bridgewater State, she was special assistant to the president for external relations at Wheaton College in Massachusetts, an American Council on Education Fellow in the president’s office of the University of Massachusetts, and a professor and department chair at Wheaton. She has also been a regular contributor to higher education publications and writes a column for the Chronicle of Higher Education’s blog Vitae. In accepting the appointment, she observed, “We have come far as an association under Rosemary Feal’s stewardship—in recognizing the broad range of institutions that constitute American higher education, in bringing attention to the concerns of faculty members at teaching-focused institutions and faculty members off the tenure track, and in broadening our sense of our discipline. I look forward to building on our momentum and championing the value of the study of the humanities.” Read the full statement.