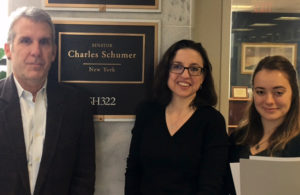 As part of its mission, the MLA regularly advocates for federal funding for the humanities in cooperation with other leaders in higher education. On 9 March 2017, the MLA’s director of programs, Dennis Looney, attended a series of meetings on Capitol Hill organized by the Coalition of International Education (CIE). Looney joined a group of international educators from institutions of higher education in New York to meet with staffers from the offices of Charles Schumer, Kirsten Gillibrand, and Adriano Espaillat, as well as staffers from the office of Lamar Alexander, chair of the Senate Committee on Health, Education, Labor and Pensions. These meetings stressed the importance of the Department of Education’s international and foreign language education programs, and CIE specifically asked that the 2017 funding for Title VI and Fulbright-Hays be increased from $72 million to $78.5 million in 2018.

On 14 March 2017, Kathleen Fitzpatrick, the MLA’s associate executive director, took part in advocacy meetings organized by the National Humanities Alliance (NHA) as part of Humanities Advocacy Day. With colleagues from the College Art Association, Fitzpatrick met with staffers from the offices of Charles Schumer, Kirsten Gillibrand, Grace Meng, Peter King, Eliot Engel, and Jerrold Nadler to thank them for their past support of the National Endowment for the Humanities (NEH) and other related humanities programs and to encourage them to continue this support. The NHA is asking Congress to provide at least $155 million in 2018 for the NEH and to forcefully reject any efforts to eliminate the agency. Fitzpatrick also drew each staffer’s attention to the importance of the NEH-funded project Humanities Commons, which makes the work that humanities scholars do available in classrooms nationwide.